Retired Episcopal bishop in Mississippi, Duncan Montgomery Gray Jr., has passed away this Friday morning at his home in Jackson. Funeral services are currently in works. 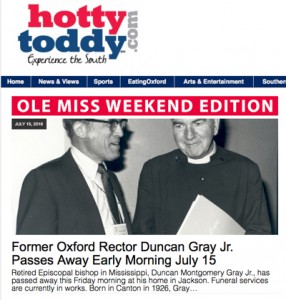 Born in Canton in 1926, Gray was the seventh bishop of the Episcopal Diocese of Mississippi from 1974 to 1993, a position that he held after his father.

The retired bishop is remembered for his role in the Civil Rights era. As the rector of St. Peter’s Episcopal Church in Oxford, he was at the 1962 riot at the University of Mississippi where he climbed on the Confederate monument and asked the students and rioters to return to their dorms and homes. The crowd eventually pulled him off the Confederate monument and beat him.

He had preached in a service before the fateful 1962 riot, saying, “For these are times which not only try men’s souls, but also infect and poison them. The seeds of anger and hatred, bitterness and prejudice, are already widely sown, and as Christians, we need to do our utmost to uproot and cast them out.”

His sermon that night in Oxford can be read in www.EpiscopalArchives.org.

His beating at 1962 riot did not deter him from working to promote inclusion through religion.

One can read about his activism in Araminta Stone Johnston’s And One Was a Priest: The Life and Times of Duncan M. Gray Jr. (University Press of Mississippi). The book’s synopsis reads in part:

From one perspective, Gray (b. 1926) would seem an unlikely spokesman for racial equality and reconciliation. He could have been content simply to become a member of the white, male Mississippi “club.” Gray could have embraced a comfortable life and ignored the burning realities around him. But he chose instead to use his priesthood to speak in unpopular but prophetic support of justice and equality for African Americans. From his student days at the seminary at the University of the South, to his first church in Cleveland, Mississippi, and most famously to St. Peter’s Parish in Oxford, where he confronted rioters in 1962, Gray steadfastly and fearlessly fought the status quo. He continued to work for racial reconciliation, inside and outside of the church, throughout his life.

Gray is survived by sons Duncan III and Lloyd, daughters Anne and Catherine along with numerous grandchildren and great-grandchildren. He was preceded in death by his wife, Ruthie Spivey who passed away in 2011.

Callie Daniels Bryant is the senior managing editor at HottyToddy.com. She can be reached at [email protected]