The Rt. Rev. Duncan Montgomery Gray Jr., a civil-rights advocate at Ole Miss, former rector at St. Peters Episcopal in Oxford and retired bishop of the Episcopal Diocese of Mississippi, died Friday. He was 89.

You can find out details of his funeral services and visitation dates and times here. They will be held in Jackson on July 18. 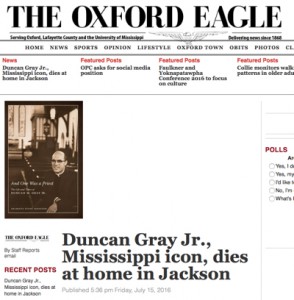 As rector of St. Peter’s Church in Oxford in the autumn of 1962, Gray called for calm as violence broke out in response to the court-ordered integration of the University of Mississippi in that city. Gray had been a chaplain on campus until 1961 and was known to students. According to Episcopal archives , Gray held onto the statue of a Confederate soldier near the main administrative building on campus and implored people not to riot.

The Associated Press contributed to this report.