“Mississippi has lost one of its great leaders with the death of Duncan M. Gray Jr.,” said the Rt. Rev. Brian R. Seage, bishop of Mississippi.

The Rt. Rev. Duncan Montgomery Gray Jr. was the seventh bishop of Mississippi, and died at his home in Jackson the morning of July 15. Gray served as bishop from 1974 through 1993. 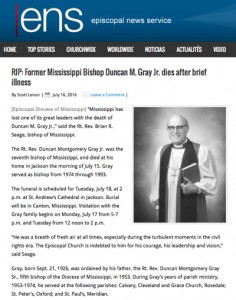 The funeral is scheduled for Tuesday, July 18, at 2 p.m. at St. Andrew’s Cathedral in Jackson. Burial will be in Canton, Mississippi. Visitation with the Gray family begins on Monday, July 17 from 5-7 p.m. and Tuesday from 12 noon to 2 p.m.

“He was a breath of fresh air at all times, especially during the turbulent moments in the civil rights era. The Episcopal Church is indebted to him for his courage, his leadership and vision,” said Seage.

Gray, born Sept. 21, 1926, was ordained by his father, the Rt. Rev. Duncan Montgomery Gray Sr., fifth bishop of the Diocese of Mississippi, in 1953. During Gray’s years of parish ministry, 1953-1974, he served at the following parishes: Calvary, Cleveland and Grace Church, Rosedale; St. Peter’s, Oxford; and St. Paul’s, Meridian.

It was while serving St. Paul’s that Gray was elected bishop coadjutor when a special council was reconvened at St. Andrew’s Cathedral in Jackson on March 9, 1974.

Gray was elected on the fifth ballot and his consecration took place on May 1 of that same year at St. Andrew’s Cathedral, with then Presiding Bishop John Hines as the chief consecrator. Presiding Bishop-elect John Maury Allin, still bishop of the Diocese of Mississippi, was a co-consecrator.

Gray Jr. believed a bishop’s role “is to be a pastor to the people within his diocese, both clerical and lay … all duties, from ordination to the most mundane of administrative details, need to be carried out in a pastoral manner; in a manner reflecting a creative concern for all persons affected or involved,” wrote Gray in a research and recommendation committee questionnaire in 1974.

“His life and ministry have been concurrent with Mississippi’s struggles to bring about reconciliation, equality and justice for all races. He was on the front line of many of those struggles accompanied by his wife, Ruthie,” said Seage.

Gray Jr. was also a strong supporter of women in ordained ministry as well as making sure that laywomen were allowed to serve on vestries and diocesan committees.

Gray Jr. was predeceased by his beloved wife, Ruthie. They are survived by sons, Duncan and Lloyd, and daughters Anne and Catherine, as well as numerous grandchildren and great-grandchildren.

Clergy and bishops are invited to vest and process at the funeral on Tuesday.

The Rev. Scott Lenoir is the editor of The Mississippi Episcopalian.